Translated to "Son of Turks", The Turcopole was a unique type of Fighting Force during The Middle Ages. Originating in the 11th Century in Byzantium - they were Elite Mounted Archers. They were recruited from a mixture of Greeks and Turks. To be a Turcopole, was considered a great honor. Traditionally, all Turcopoles had to be conveys of Christianity. They were first deployed to The Crusades States of The Middle East as Light Cavalry. So effective in this role, that many traditional European Heavy Cavalry began to readapt their Forces. Turcopoles were also deployed as dismounted Infantry Archers to The Kingdom of Jerusalem in the 13th Century.

In addition to being Archers, in their dismounted form, Turcopoles used Spears and Short Swords. Their Armor was light, consisting of Chain Mail, Halverson and other types of light protective garments. They used various forms of protective headgear. The Turcopole Force was severely tested during the Battle of Harrin in 1187. Overwhelmed and all but decimated by Heavy Muslim Cavalry, they were never fully reconstituted. 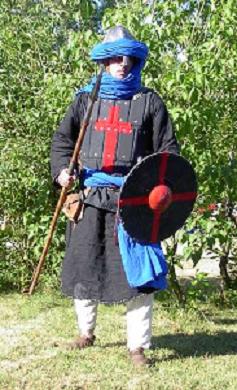