Originally starting out as Byzantine Imperial Guards (4th Century), from the 8th to the 11th Centuries, The Tagma were the elite combat unit of Emperor Constantine V. They were exclusively heavy cavalry and served as a Home Guard unit. They followed the ancient ranking system of Rome (Tribune, Centurion etc). Being heavy cavalry, they carried a version of the European Buckler (sometimes also using a form of Kite Shield). They used a blue and yellow color scheme for their uniforms (changing it later to orange and red - Imperial). They favored a Plated Armor shirt-coat (full sleeved and short versions as well). They used the standard Conical Helmet (popular in the Middle East).

The Tagma liked Chain Mail to protect the face and neck. Greaves were also popular - (although plain mid-high leather boots were often substituted). Their weapon of choice was the Arabian Shamshir. The Arabian Bow was favored as well. The Tagma were highly effective in both heavy and light cavalry uses. For a period, they were the pinnacle of Byzantine warfare. 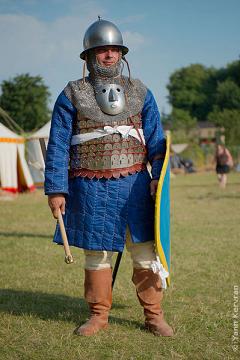