After the 11th Century A.D., The Byzantine Empire abandoned it's traditional “Front Plate” Armor components – in lieu of a design very similar to late 4th Century Western Roman Armor. Still considered in The Lamellar Family of Armor, these suits featured riveted plating mounted to the entirety of the wearers front (and extending towards the Back). The plating was set on thick leather reinforced strips (to provide comfort as well as serving as a form of “load bearing” system). Spaulder-type formed shoulder plated was also attached. The upper arms (down to the bend of the wearer's elbow was protected by a semi-enclosed shaped armor plate (connected by leather strapings). This for of armor also took the Ancient Roman Petruges and mounted them on the lower front of the suit (hanging down), and serving much in the same fashion to protect the Wearer's groin. It was much lighter to wear and was somewhat easier to remove. 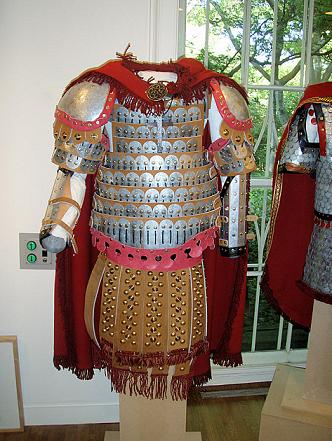