The Byzantine Excubitors (meaning ''Sentinel''), were a form of Imperial Guard to The Byzantine Emperors, from the 4th to 10th Centuries AD. Much like the latter Roman Imperial Praetorian Guard, they were very influential to the power of an Emperor. Originally recruited from the Warrior Isaurian Clans of Southeast Asia, they were a professional fighting Force which emulated the ancient Spartans. Officers of The Excubitors also served as Diplomats and Ambassadors to The Empire, from which they derived their enormous political powers. Unlike The Praetorians, The Excubitors were not so easily bribed or curried for favor.

They would go on to form the primary backbone of the early Byzantine Army. Another known fact, is that traditionally, Excubitors were mounted soldiers, preferring not to fight on foot. They were known to use the Long Spear and Spathion (Long Blade) – both favored by Eastern and Western Roman Cavalry Forces in the 5th Century AD. The Excubitor also served as Military Governors of captured territories also commanding Occupation Forces. In this function, they served very much as did The Roman Tribune. The Excubitors would continue until roughly 1081 AD, when Byzantine Imperial control began to wane due to the rapid expansion of The Ottoman Empire. 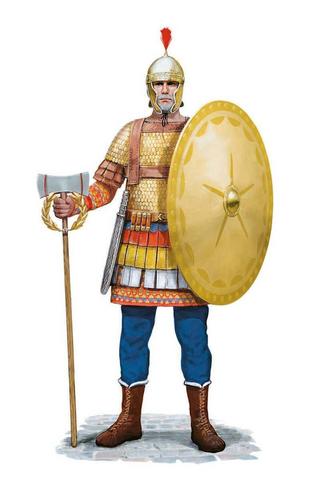