The ''Divellion'' was a late Byzantine Imperial Standard (15th Century AD), used by The Emperor. It was bore before him (either on foot or horseback), to ''announce'' His presence. Only a specially chosen Bearer (known as The Skouterios), could carry it. Flown as a Banner Vexiloid (suspended downward), it was not used when The Emperor was aboard a Naval Ship. The Divellion was a Purple Field (which was the official Imperial Color of both The Eastern and Western Empires). A Gold Cross occupied The Field, covering all (4) Quadrants. A variant of The Divellion was retained after The Fall of Constantinople (1453 AD) and used by The Monarchy of Serbia. 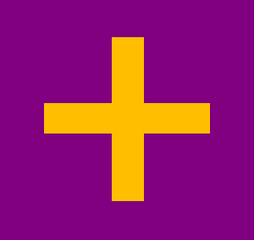