Developed around the 15th Century, The Bycocket was a form of Men's hat. Designed originally for Nobility, they were made of reinforced cloth that was starched - using plant organic materials pounded into a meliable paste. Once dried into shape, The Bycocket took it's characteristic shape. Covered in fine velvet and jewels, often fine plumage was also added.
The style was soon adopted by most European Countries. So much so, that even the common Peasant began to adopt a more simpler design so that they too could present a fashionable appearance. So popular was The Bycocket in England, that (due to the Medieval tale of Robin The Hood), many Archers adopted the headgear as common gear. Although most Nobility had ceased it's use by the end of the 16th Century, many commoners still retained it's use. 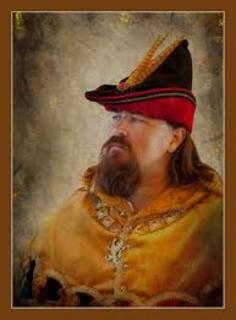