A very odd category of Ancient Roman Gladiator – that existed very early in The Arena Games ''creation'', The Bustuarius were Gladiators that ''killed'' captive Slaves, Convicts or related Prisoners. These bodies would be allowed to gather into a pile of corpses. The blood generated by this gory pile was them offered to The Gods and Gladiators as a means of increasing their ''power'' – before a Match. Later, this Class would slaughter victims at the actual Graves of fallen Gladiators. This was to honor them and give the living ''Good Fortune''. Some of the earliest recorded Bustuarius spectacles date to the 4th BC (and may have been borrowed from Ancient Greece, in particular Sparta). 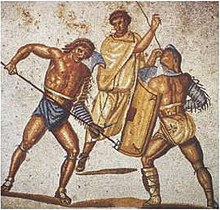