The origins of The North African  Burnous Cloak comes from similar designs seen in the 18th Century. Used by The Berber Tribes, The Burnous was more closely associated with a mantle of “Authority”, worn by Tribal Elders. With French Occupation and Colonization of Northern Africa, their Military Forces began to adopt The Burnous Cloak for their Uniform use. The Cloak was made of thick wool and was designed to wrap around the entire body. A Hood was also attached. The Burnous Cloak extended to the Upper Calve.

Although the need for a wool Cloak in Africa would be unusual, the Desert of North Africa can be quite cold at night – hence it’s need. Colors used in the French Army, in particular The Algerian Spahi Regiment, were off-White. Khaki and Tan were also seen. The Burnous Cloak is still used by The Spahi as part of their Dress Uniform. 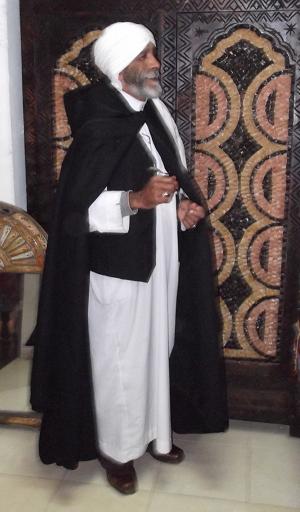