Another flag of Texas Independence was The Burnet Flag. Adopted by The Texas Congress in 1836 as an “official/unofficial” flag for The Republic of Texas, this was the flag that began the term “Lone Star” which referred to The Republic of Texas. Based on the 1810 Flag of The Republic of West Florida (another separatist Colony rebelling against Spanish Control) – The Burnet flag was a blue field with a large 5-pointed yellow star in the center. Considered a precursor to “The Bonnie Blue Flag” of later Confederate Government use, some variations have the center star as white with lettering spelling out “TEXAS” placed clockwise around the star. The Burnet Flag would stop being used “officially” in 1839. 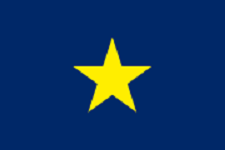 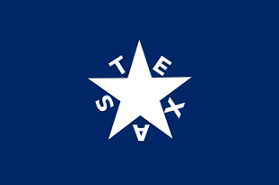