We've all seen the image. A group of ruthless Pirates on some long forgotten piece of beach on an equally "out of the way" island, digging a hole to bury their ill gotten "booty". It is yet another unfortunate myth of "Pirateology".
Too be sure, and it was well known - a few Pirate Captains resorted to this practice. Names like Edward Teach (Blackbeard), John Rackham (Calico Jack), to cite the more illustrious. However, in practice - burying one's gold and treasure was impractical. Pirates spent what they earned - readily. Each crew member was afforded a share, per Ship Contract. Violation of this by a Captain would have been a breach, and may have even warranted a Mutiny (or potential future crewmen refusing to join a "cheating" Ship.

It would have been difficult at best for a Captain to bury a "stash" of treasure. Others he "trusted" would know as well. This would lead to the OTHER long told Pirate myth....."Dead Men Tell No Tales". In the event a Captain buried treasure, this was seen as "Rainy Day" finances. Perhaps to be used to buy off a Governor, pay off a "Death Bounty", or even purchase a new Ship (should the old one get sunk or otherwise lost). The allure of buried Pirate treasure was placed into Public thought again, by Novelist Robert Lewis Stevenson and his book "Treasure Island". No doubt, the idea was gleaned from that "Pirate Bible", Johnson's "A General History of Pyrates". Since the two books, the "search" for Pirate "loot" became quite an industry - with most "treasure" found among the sunken wrecks of known Pirate vessel (the "real" buried treasure). 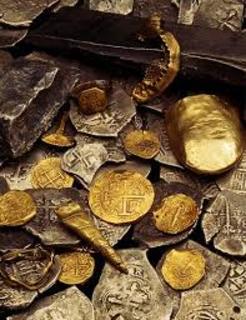