Derived from The Roman (Latin) term for ''Tower'', The Burgus Defensive System was developed around the 2nd Century AD and carried forward. The Burgus style of construction would be copied and re-developed by many other later Societies and are widely accepted as one of the first forms of true Castle building. Under Roman Emperor Valentinian (late 360 AD), a plan to reinforce much of Rome's frontiers (especially in Germany and England). The extensive use of Vallum's and temporary Legion and Auxiliary Camps (connected by such) was the norm. While in many cases, these permanent Camps would evolve into larger Colonial Villages and later Cities – a permanent defensive structure was required.

The Burgus System could best be described as a large squared structure, very much similar to the later Medieval Keep. These buildings could feature as many as 4 floors in some cases. They featured living quarters for Military Officers, Administrative Offices and Armories. Later, even larger basement levels would be added for jails and further storage areas. The Burgus was surrounded by a Vallum. However these Vallum's did not feature the traditional Spike systems. They were originally earthen berms – which later evolved into 3 to 5-foot tall simple stone walls. Normally at each juncture of the (4) walls (corners), a wooden Guard Tower was placed. These structures were often made of simple wood and around 15-feet in overall height. The central Burgus structure was wooden, but some examples of stone were know to exist

A more specialized Burgus was also known to exist and used for River protection and enforcing tariff and tax collections. These Burgus would evolve into Port Cities – especially in Ancient Britain. 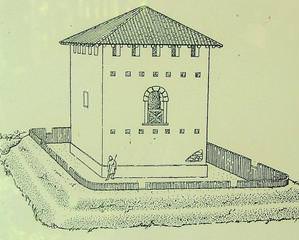