Burgundian Order of The Golden Fleece

Once considered the MOST prestigious Award of Chivalry issued through Europe, The Order was created by Philip III of Burgundy in 1430. It was occasioned by his marriage to Isabella of Portugal. Given to Male Nobility that were considered “Consul” to Philip – the Award split in 2 separate issued (when The Habsburg Line became Emperors). Initially, only non-accused Catholics (no heretics in one's Family – EVER), could receive the Award. Later, Treason was also added. Oddly, even the Dictator Napoleon was awarded The Order (although this caused much controversy). Originally designed as a Livery Collar of Gold with precious jewels – it featured a “fleeced animal pelt” (also of Gold), suspended from the Outer Chain. It would later evolve into a proper Badge Device and Ribbon (worn attached high to the neck and throat). Many members of Royalty were awarded the honor (seen also as a way to cement “political” alliances”). The Order also was one of the few that did NOT use a traditional Ranking System, with the Title of the Holder being preferred. The “lowest” Title that could earn the Award was an Archduke. 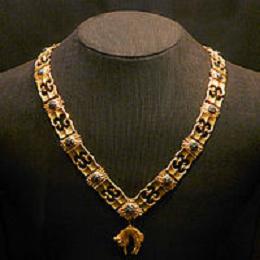