Developed in the 16th Century, these were open faced protective head coverings. Made with an attached neck collar, they were characterized by the large metal peak - attached to the top (similar to the Spanish Morion). Often seen with an attached front bill or ridge, more often than not - they did not include a visor. When some versions were made WITH a visor, it was designed to stay in a closed position (affording a larger gap between the top of the visor and the helmet). Versions from Spain and Italy were highly decorated. The side facial plating were part of the upper helmet design. They were normally made from two metal components (the helmet proper and the ear neck and side plates were riveted on). They became very popular with The Swiss. A variation of the Burgonet was seen as late as World War I. 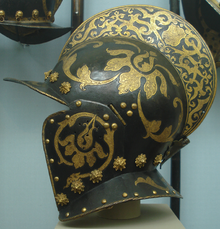