Normally drawn form the “Common” Citizenry, a Burgess served as a form of local “Parliamentarian” Government. Formed around the late 15th and early 16th Centuries, a Burgess was normally along par with an Alderman or Mayor. The administered Laws and Protocols for Regions. Although not considered “poor” Commoner, they were also not Titled. They would be on par with a formal Representative (both of their Region and of a particular and like figure in actual Government – as with a Constituent). In The American Colonies, a Burgess had a much more formal and Authoritative role. They oversaw (and were expected to enforce Royal Law). Many of these Burgess considered themselves to be the “Upper” or “Ruling” Class of their Regions. Official Robes and symbols of State were seldom used. In many Germanic Nations, The Burgess was seen also as an intermediary to a Prince, Regent, King or Queen. 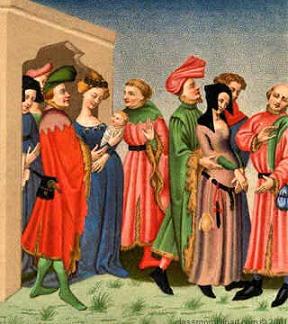