As we have seen previously, Soldiers from both sides of The American Civil War (1861-1865), wore the popular 1850s Military Uniform headgear, known as The Kepi. It was likewise popular through most of Europe. Another style of Hat used exclusively by The then Union Army was “unofficially” known as The “Bummer”. The Kepi was a short, circular Crowned Cap , which sloped slightly to the front of the Brim. Excess material was folded, giving it it’s distinctive shaped and appearance. As The War dragged on, replacements became harder to get in the Field. Often, The Kepi (often made of wool), would pull and unravel at The Crown. Thus was due to improper care and constant exposure to The Elements. The rolled Crown began to appear as a “drooping sock” or “stocking”. They were dark Blue in color and featured all trappings of a traditional Kepi.

However, these Caps derived their name of “Bummer” by the function of the Soldiers who wore them. By 1864, Union Army General William Tecumseh Sherman had launched his highly destructive and effective “March To The Sea” Campaign, in which he marched just massive Army through Confederate Georgia and portions of South  Carolina. The supply of such a large Army was at best difficult. Soldiers and Commanders were given Orders to forage for what they needed. Although Military Law and justice was supposed to apply. In reality. Many of his Soldiers stole and murdered to get what they needed. Officers were not much better. It was these actions – which were part of Sherman and Grants “Total War” Policy, which cause so much hate after The War against Northerner. These forages were thus known as “Bummers” (a link to Tramps and Vagrants). These men wore their shoddy Caps with great “pride”.

With the end to The War, such Caps were seen as a standard issue to The Union Army, and are often shown as the exclusive headgear if The Federal Army (which they were not). Some Confederate Units adopted them towards the end of The Conflict, in very much the same way. Examples were seen into the 1880s with The American Plains Cavalry  (again adopted by ex-War Veterans). 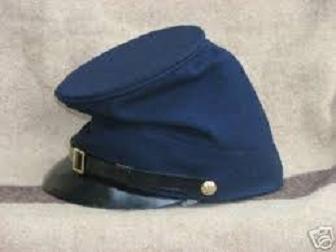