A type of Talisman, The Bulla was worn by Roman Boys as a form of protection against sexual immorality and evil spirits. Used from The Kingdom Period forward, The Bulla was an important part of “coming of age” for a Roman Male. Wealthier Classes made their Bulla (or Bullae) from Gold and were Heart or Circular in shape. Size ranged from 3 to 4-inches in diameter. Inside The Bulla, were various smaller symbols (mostly phallic in shape). The Bulla was worn (via a chain or cord) – around the neck. This was the only form of outer decoration worn with a boys clothing. They were often Gold (but some Silver were known to exist).

Commoner Boys wore Bulla too (if by emulation of their wealthier counterparts). However these were made of leather and hand sewn. The Bulla was used the same way. In both cases, when a Boy was 2 years of age, he was presented his Bulla by his Father, in a stylized ceremony. Close Family friends were often invited with a feast guaranteed.

When a Roman Boy became a Man (at 16-years), he was to remove his Bulla. It was tradition that he no longer needed it. However, if the Boy (Upper Class), rose to the Rank of General in The Army, he often would don his childhood Bulla and wear it for Promotions and other Ceremonies. Bulla were not passed down from Father to Son. Each was specially made and “spiritually activated” by a Priest. 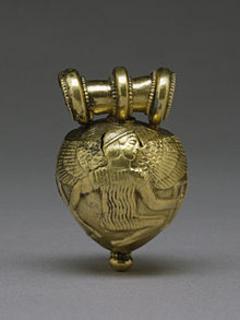