These Turkish, Nomadic people migrated onto the Steppes of Southeast Europe around the 6th Century A.D. Dividing into two groups, one went into The Balkans. These “Danube Bulgars” were influenced by Native Slavs and The Byzantine Empire. So much so, that by the 9th Century A.D. - their distinctive language had been replaced by Slavic. Pagan by birth – it was around this time that they converted to Christianity. Conquered by The Rus and then The Byzantines – The “Danube Bulgars” were an independent Nation in the 13th Century. By 1393, The Ottman Empire had assimilated them fairly completely. Bulgaria is named in their honor. The second branch of the Tribe “Volga Bulgars” -settled North of The Volga River (Russia). Important among Viking Commerce and Trade, they flourished in the slave, fur and silver industries. They converted to Islam around 922 A.D. Taken over by The Mongol Invasions, the “Volga Bulgars” were assimilated into Mongolian culture extremely well with little or none of their “old ways” seen or practiced. 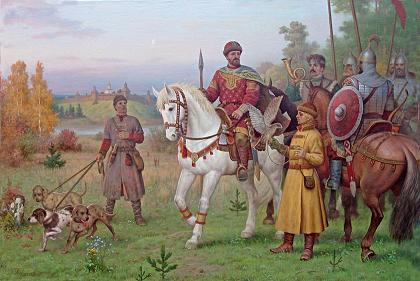