Classic and iconic in appearance, The Buckskin was a style of clothing worn by most Native American Tribes. Prevalient in The Great Plains, Buckskins were as essential as was food and fire. First reported by early French and English Trappers and Traders as early as the 17th Century, the clothing style was obviously much older (perhaps thousands of years so). The term “Buckskins” was not Native American. Trappers, seeing how they were made (from Deer or Buffalo hide), gave them their now, very recognizable title.

In production, Tribal Women were solely responsible for creating clothes for her Family  using Deer and Buffalo hide, they were de-furred and scraped clean of muscle and tissue. Large swathes were then washed with water and stretched on Poles to dry. After a period of time, they would become supple. Next, the cleaned skins were scrapped with Rock, Bone etc. Carefully done, this “softened” the skins. Patterns cut for Shirt and Trousers were made to size and hand stitched with leather (using Awls, or large wooden “Needles”). Soon, a pair of Buckskins were produced. These were very durable pieces if Clothing, designed to last a long time. Traditionally, Shirts did not feature buttoned Fronts, but we’re slipped over the Head and worn thus. Trousers were cinched with leather cords, normally from the sides. Women made a type of long Dress, which extended to the knees. These pieces were sewn and joined from the sides.

Decorations (such as beadwork or paint), was a matter of Tribal taste. Some were decorated , others not. Some Tribes pre-made special “Marriage Dresses” for use when younger Members of The Tribe married. There as no specialized “Warrior Clothing”.  The use of free hanging “Fringe”, a very common image conjured by many “Fans” of Western Movies, were at best a concoction of Western mythos. While Fringe did exist, it was not as common with as many Tribes as one thinks. Most Fringe was strictly worn by American Trappers,  Hunters and Mountain Men, who adapted Buckskins from Native Americans. Variations were used in The US Army, especially by Officers assigned to The Plains. Made or purchased privately, the use of Buckskin became popular. General George Custer was reputedly wearing a Buckskin “Suit” at The Battle of The Little Big Horn.

For a period of time in the 1960s and 70s, Buckskins made a resurgence in American Counter-culture, among the young and disenfranchised. Still made today (albeit by more Modern ways), a “good” Buckskin Shirt or Coat can cost several hundred USD. 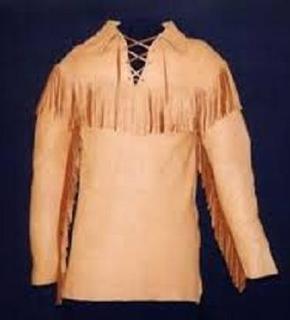