The most common Firearms Ammunition of the 18th Century, The Buck and Ball was used by many Armies throughout The World. Normally rated between .50 and .75 Caliber, the Round consisted of a single Lead Round Ball. Underneath this Round (or sometime on top of it), 2 to 3 smaller Lead Pellets were placed. The entirety of these Shot were placed inside a standard cloth or paper Cartridge. “Tied” shut (in some cases), the Gunpowder charge was roughly 130-grains.

Once loaded in a Musket. Primed and fired, The Buck and Ball Shot spread outwards, to produce an almost always fatal injury. Designed originally as a Hunting Shot, it was quickly adapted in Military and Militia use. By example, even with the advent of better Firearms and more effective ammunition, The Confederate Army during America’s Civil War, commonly used the legal rounds. With the invention of Brass Cartridges, The Buck and Ball Round (as all other Blackpowder forms), ceased in use. 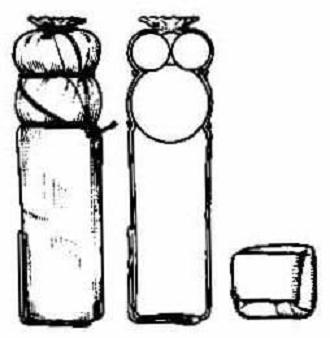