The use of a Bridge in Heraldry, was related to Administrative Positions. Examples seen and issued were a Governor, Mayor or related Government Official. Such symbolism is seen as far back at The Roman Empire. Popular in Germany around the 16th Century, The Bridge symbol became associated with Engineers and Bridge Builders (unofficially). As such, it created much confusion. Many Administrators awarded such Heraldry images, had either Cornets or related symbols of “Power”, to differentiate from them. Coloring was also in natural or brighter tinctured shades. Sometimes great detail was added, others not. Water imagery was seldom used. 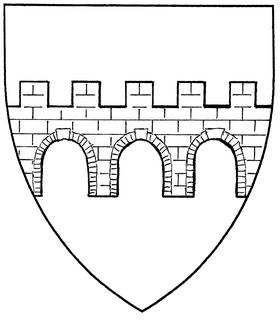