Another Flag used during the Texas War of Independence, The Brown's Militia Independence Flag, incorporated several popular Flag icons of the time. Said to have flown at the Battle of Bexar and possibly at Goliad as well, it was based on Captain Phillip Dimmit's "Bloody Arm" Flag.

The Arm Flag had it's roots in The Polish Naval Ensign of the 16th and 17th Centuries. Brown's version incorporated The US Stars and Stripes Pattern of 7 Red Stripes and 6 White Stripes. The left Canton was unusually larger than what was seen in The Era. Taking up most of The Hoist, The Blue Field bore a Human Arm, bearing a blood stained Sword. The drops of "blood", pool onto the Arm itself. The phrase "INDEPENDENCE" was placed on the striped Field. 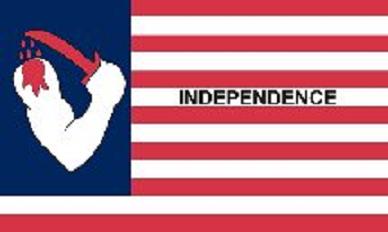