The Browning Model 1900 Automatic Handgun, was US Firearms Maker John Browning's first successful and marketed ''Slide Automatic'' in 1896. Unfortunately, early prototypes were not chosen initially by The US Government, and only to private Owners. Browning sold His manufacturing patient to Belgium, who produced The M1900 in great numbers (over 700,000). Weighing 1.3-lbs, The M1900 was a .32 Caliber round gas operated weapon, roughly 6-inches in overall length. The Handgun fired (7) rounds (plus 1 in the chamber), from a steel feeding clip secured in the grip of the weapon. Popular in Finland in the 1920s, the bulk of The M1900 Models were sold to China, and was a popular sidearm during World War II. Some Models were still in inventory as late as 1964. 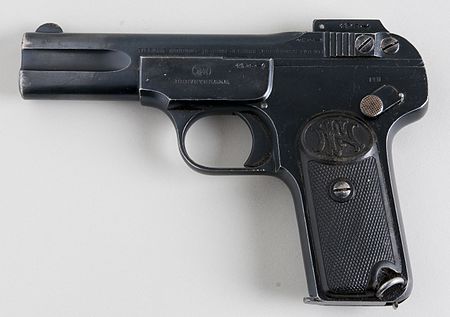