Named for Anne of Brittany (15th Century French Ruler), The Brittany served several religious functions. It covered the head of the wearer and restrained the hair. Hair then - had a strange place in Society. While considered a "Woman's Glory", there were cultural restrictions in place for HOW it was worn. Female children and young girls (up to 15), were allowed to wear their hair freely. Upon Courting and Marriage however, a woman's hair in most "Noble circles" in Europe were supposed to bind or tie up the hair. Although there were some "radical" females (England's Anne Boleyn, for one) - did not follow protocols, it was still the "norm". Herein lies the problem. For the most part females grew their hair out quite long (rarely cutting it among Nobles). "Elder" or mature women did. How then to restrain such "long locks". The Brittany handled this problem. A simple sock-like cloth extension could be attached to the rear of most female headgear. Of different sizes, hair could be thus wrapped and placed inside to present a uniform appearance.  Some varieties featured double extensions which were flatter. These were more "labor intensive", to the the time required to "press flat" The hair to fit and appear appealing. The Brittany style would eventually bow to fashions which allowed for the hair to be seen and "free flowing", although some elder women still retained some styles past the 17th Century. 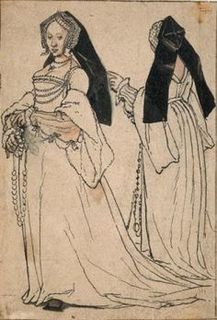