Developed in 1940, The British ''Z'' Battery – was a Multiple Rocket Launching System in use during World War II. A Mobile System (which was towed via Truck), these Rocket Batteries were manned by The Royal Artillery until 1942. After which, Home Guard Units began to deploy exclusively with The Systems. The primary Mission of The ''Z''Batteries were for the protection of The British Mainland – in both a pre-invasion threat and the continuing German Luftwaffe attacks on English Cities. The ''Z'' Batteries deployed a solid-fueled, 3-Inch Diameter (5-Foot Long) High Explosive Rocket Cluster of (10) devices. The Rockets were not guided – but were altitude, line of sight weapons. In theory, a massive ''cloud'' of Rockets could be launched by multiple Batteries (thus increasing overall ''Hit'' achievements).

The Royal Navy also used ''Z'' Batteries along with other Coastal Defense Weapons Systems – but would eventually transfer these to Home Guard Service. Over 2.4 Million Rockets were produced and deployed in various Air Defense measures throughout The War. Many Batteries were credited with shooting down various German V-2 Rockets. Variants were produced, with the last version – The Mark II capable of deploying as many as (36) Rockets in a ''ripple'' effect (similar to The US ''Whizbag'' MRL Mobile System, then in use in both Europe and The Pacific Theaters of The War).

In a tragic sidebar to the History of The ''Z'' Batteries, a massive accidental explosion of a Battery occurred in East London which killed 173 and wounded 90 in 1943. Despite this, The ''Z'' Batteries lasted until after The War in 1945 – and were credited with a greatly lower damage ration to The City of London and surrounding areas during The Blitz. 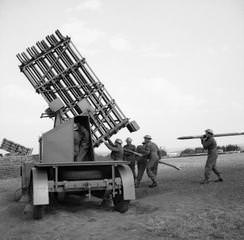