The “newest” of The Guard Regiments, The Welsh Guard was “officially” formed in 1915 by King George V (England). Their first official duty was Guard Mount at Buckingham Palace. The Regiment fought at several battles in World War I (evening earning it's first Victorian Cross for Valor at The Battle of Loos). From the War's end until 1929, The Welsh Guard served primarily in Ceremonial role (Trooping The Colors and Guard Mount). They were one of the first Army Units sent overseas (Gibraltar) at the start of World War II (1939). Having fought in Belgium and France, The Welsh Guard also were present for the Retreat from Dunkirk. A Tank Battalion was later formed and The Welsh Guard served in Brussels.

After the War, The Irish Guard too saw extensive “Cold War” duties in Garrisoning Germany (Berlin), and were instrumental during the “Berlin Airlift” of 1952. They too participated in the many Peacekeeping Missions in Northern Ireland during “The Troubles”. The Irish Guards were later deployed as assigned to NATO Forces in Cypress and the surrounding Regions (also as Peacekeepers). As with all other Guard Regiments, The Irish Guard also have served in the many modern Middle Eastern Conflicts. Wearing the traditional “Scarlet and Black” uniform (and of course The Bearskin Hat), as they are 5th in “Line” - their Button ”spacing” is in grouping of “5s”. Their insignia is a Gold Leek (Plant). Their Plum (feather) is worn on the left side and is White, Green and White. Their Motto “Wales Forever”. 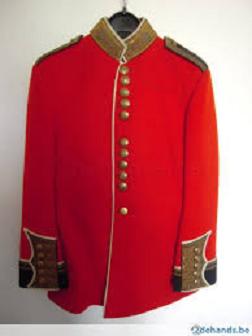