Produced by The Webley Firearms Company under designs of British Army Officer Vincent Fosbery, The .455 Caliber was and early example of an Automatic Pistol used during World War I. A popular hand gun from 1901 to 1924, The Fosbery still maintained the traditional “Revolver” shape, but was innovative for it’s “self-loading” mechanism. The sliding action of the cylinder (which held from either 6 to 8- rounds), allowed the ammunition to move into the firing position between the Firing Pin and barrel more smoothly, as opposed to the rotating fashion used by traditional revolvers. The trigger was also designed to allow for a form of “rapid fire”, which classified it as “self cocking”. Capable of chambering a .38 Caliber round as well (which made it popular for a period in The United States), The Fosbery weighed slightly over 1-pound. It was 12-inches in length and had a maximum effective range of 350-feet.

Over 5,000 production Models were manufactured for use by The British Army. The Fosbery also became popular with many Police Agencies throughout Europe for a period. It was retired from service with The British Army due to issues with trigger pull. Being at times “impossible” to fire with just one hand, The Fosbery required a “two handed” firing position – something which was often times difficult in combat. Despite it being retired, many Fosbery’s remained in use with Police until 1939 – favored for their stopping ability. 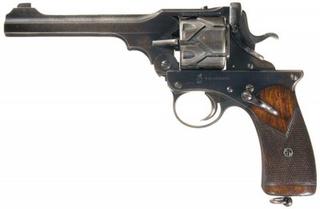