The first true “Automatic” Pistol developed and issued for and to The British Army, The Webley Automatic Pistol was a part machined, part hand assembled Handgun, first designed in 1903. It used the then somewhat uncommon .38 Caliber Round. Small, The weapon was called “Self Loading”, due to the spring fed Ammunition Clip, which fed a Round after each cyclic rate of fire. The Barrel was only 3-inches in length.

“Automatic” firing was achieved by as fast as ones finger could pull the trigger. It’s drawback was it’s short range of 25-feet, and jamming issues with dirt. A common weapon with British Officers, The Model 1903 was still seen in use during World War I, despite the availability of The Colt Model 1911 .45 Cal. Automatic Pistol from America. 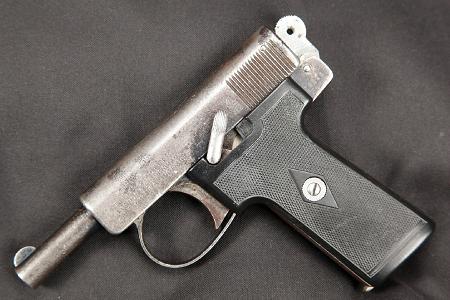