A popular self-defense Firearm manufactured by the famed Philip Webley & Sons Firearms Company of England, the apt named "British Bulldog" was known as a "Hideaway" Gun. Marketed originally for Officers to carry hidden in their Military Greatcoats, The "Bulldog" had a 2.5-inch barrel. Weighing only 1.5-pounds, it was chambered for the popular .450 Cal. Round. Licensing agreements saw The "Bulldog" manufactured in France, Spain and Belgium (in several other Calibers as well). The .44 Cal. Version was popular in The United States for a period.

It's maximum effective range was rated at 20-yards. Made between 1872 and 1917, The Webley Bulldog became the basic issue to The Royal Irish Constabulary. It is rumored that even US Army Lt.-Colonel George Armstrong Custer even carried a matched set at The Battle of The Little Big Horn in 1876. The "Bulldog" also shares and page in History darkened by infamy. It was this choice of Firearm used by Charles Guiteau on July 2, 1881 to assassinate US President James Garfield. 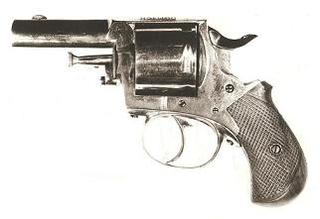