The premier British Revolver of the 19th Century, The Webley was also one of the most exported of firearms. It is estimated that over 1 million were manufactured and exported to just about every Country in The World's Military (or Law Enforcement Forces). Officially adopted by The British Army in 1877, earlier versions made their way into American West (with a Webley being one of American Cavalry Colonel George Armstrong Custer's “personal” favorites). The Webley was a “top break” frame – that provided quick access to the weapons chamber for reloading. Early variants also have the implementation of a “speed loader replaceable” chamber (pre-loaded), for even greater speed (but these would not catch on – yet). The Webley was very popular on both sides of The African Boer War and would follow through to World War I. They were replaced in 1923 with Automatics. Considered a Double-Action weapon, The Webley as said fired the .577 round. It had a 50 to 600 yard firing range, A typical unmodified Webley weighed 3-pounds and was carried in a specially designed holster. 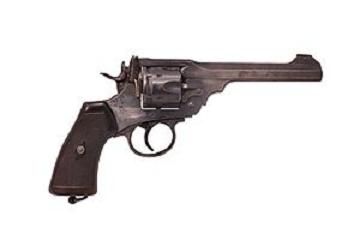