Developed to be Britain's primary Heavy Bomber to attack The German Homeland, The Vickers Vimy was produced in 1917, but we're not released to operational status until after The War in 1919. A triple-seater, The Vimy was 43 feet long with a 68 foot multiple wingspan. Capable of airspeeds of 103 mph, it had an operational ceiling of 28,000 feet. Armed with 4 Vickers .303 Machine Guns, The Vimy carried 2,000 pounds of ordnance. An actual Squadron was deployed in the event The Armistice did not hold. Later, Squadrons were sent to guard English concerns in Egypt, Northern Ireland and in Mainland defense of Great Britain itself. The Vimy remained the principle Bomber of The Royal Air Force until 1925. 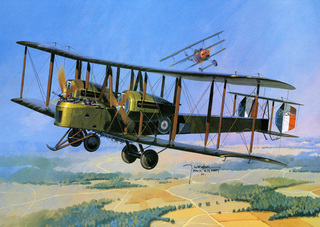