The British Vickers Type 559 was an Interceptor Jet proposed for the previously discussed Operational Requirement F.55 (a Cold War British renovation of it's Air Protection and Superiority Plan). The Type 599 was deemed too expensive and it was never advanced. Proposed to be 70-feet long, with a fixed wingspan of 43-feet, power would have come from (2) de Havilland Gyron Afterburning Jets, providing 20,000-IBF of Thrust. In addition, (2) fuselage mounted de Havilland Junior Rockets would have been mounted. These chemical reactive and produced 5,000-IBF of Thrust each. Maximum speed was rated to Mach 2.5. Operation ceiling was to be roughly 60,000-feet. The Type 599 would have (1) Pilot. Armament was determined to be Air to Air Missile Packages. 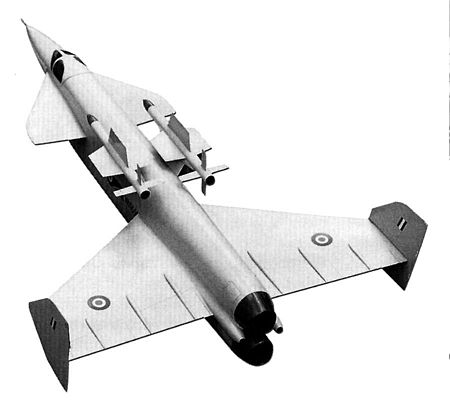