The British ''Town''-Class of Destroyers were a grouping of (50) former US Naval Warships (Destroyers), which were built in the late 1920s thru the 1930s. These Vessels were decommissioned and mothballed. With German activity in 1940 Europe reaching a point that out and out War could happen at any given time, Great Britain needed to raise it's number of Naval Warships quickly. US President Franklin Roosevelt entered into a deal with The British Government to purchase former Warships of various Classes for their usage. In exchange for the ''deal'', Great Britain gave land concessions for future US Naval and Military uses (Bases and Ports). It was widely seen (based on the anti-European War sentiment in America of 1940), that while The US may NOT become outright involved, it may at some point. Many US Military Commanders found this a viable option. However, many attacked Roosevelt's plan (nicknamed ''The Ships for Bases'' Deal) as being ''War Hawkish'' and would be seen as a threat to both Germany and Imperial Japan. Once reconditioned, which was seen as much cheaper than the building of new Vessels, the newly commissioned ''Town''-Class of Destroyers would serve valiantly during World War II. (10) of The Class would be lost to enemy actions with the remaining (40) remaining in Service until 1947. The Classes were eventually scrapped. 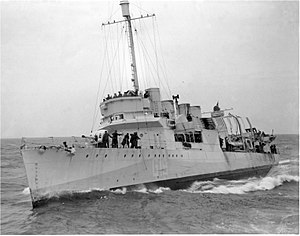