The "Medium Capacity Bomb, 12,000-Pound", nicknamed "The Tallboy" was another aptly named "Earthquake"-Class Explosive Device designed by Great Britain during World War II. Deployed against Germany in 1943. The device contained 12,000-pounds of TNT high yield explosive. "Tallboys" were 22-feet long with a 40-inch diameter. Designed to detonate upon penetration of 100-feet of Earth, they could destroy 20-feet of non-reinforced Concrete. Named for their slender appearance, "Tallboy" explosives had an issue due to this design factor. Known to "roll" or "tumble" end over end, specially designed Gyroscopes were designed in their rear to help remove this issue. Deployment was best at an altitude of 18,000 feet. The "Tallboy" could achieve a drop speed of 170-mph. Best remembered for their use by the famed British RAF No. 619 Squadron  ("The Dambusters"), this Bomber Group tackled destruction of German "Hard Water" Production Facilities - with great success, as a result of their use of "Tallboy" Bombs. 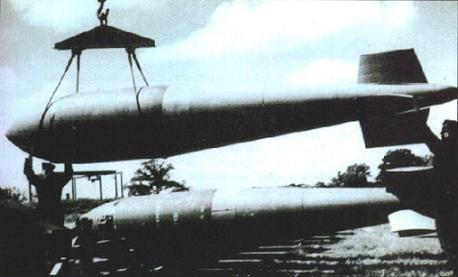