Deployed in 1966, The ''Swingfire'' was a ''wire-guided'' Anti-Tank Missile System used by various Units of The British Army – during The Cold War. Close to 50,000 Models were produced. The Missile (which was deployed in 4), were commonly installed on ''Striker'' Multi-Purpose Vehicles. Traditionally, The Warhead was a HEAT Round. Powered by a solid-fueled Rocket Motor, The ''Swingfire'' was so named for it's ability to rapidly traverse to firing position. Maximum effective range of The Swingfire was 3,000-yards. The Model was discontinued in 1993, although some foreign allies to England had purchased The Swingfire and would continue their use slightly longer. 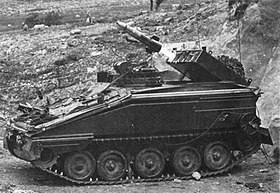