Designed in 1915 by Wilfred Stokes, The Stokes Light Mortar was driven by the ability to “marry” light artillery with rockets, that could be deployed by infantry. Up to that point the term “Mortar” was applied to heavy(and fixed) specialized artillery pieces. The ability to develop a lightweight tube for close combat situations – lead to The Stokes Mortar. Overall weight was 104-pounds. The Stokes required a 2-man crew to operate. The Stokes fired a 3.2mm High Explosive Round between 750-800 yards. Designed to counter The German Minenwerfer Mortar, The Stokes proved an effective weapon.

The Stokes was a “simple” weapon. It featured a 4 foot smoothbore metal tube attached to a circular stabilization plate. A tangent yoke was attached underneath (front) – which not only held the tube in position, but was also used to elevate or depress the tube. The shell (cylindrical in shape with small stabilization fins), was dropped down the tube. The primer (located at the bottom of the shell), would strike the firing pin (fixed inside the tube base). Impact with both caused the ignition and launch of the projectile. Shell impact was via direct impact (percussion). The general size of The Stokes Mortar mad it an ideal Trench weapon. Most Countries imported and used The Stokes Mortar during The War. The weapon (although wartime production ceased in 1918), was still seen and used at late as 1940. 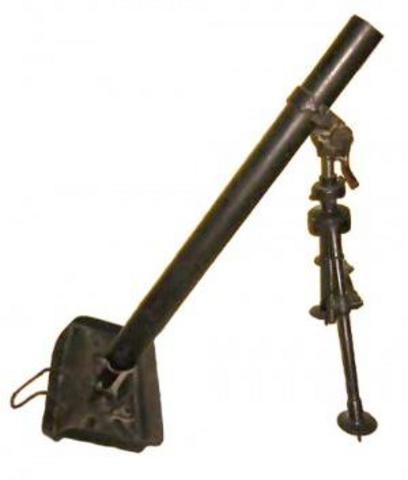