Although Imperial German is often credited with the development of the Tri-plane (or three winged Fighter), it was actually first developed by Great Britain. England needed a top speed Fighter for air combat. First produced in 1916, the Sopwith Triplane was a single-seat Fighter that was 18 feet long with a 26-foot wingspan. Capable of a top speed of between 116-120 mph, it had an operational ceiling of 18,000 feet. The Sopwith Triplane was mounted with either a singley or twin Vickers .303 Machine Gun. Deployed to The Western Front, they had an excellent Battle record.  Unfortunately, they became cost prohibitive for England, which switched to the more economic Camel Model. Germany, much impressed - modified some of it's DVII and VIII Class fighters to Triplane Fighters, retaining a few until the end of The War. 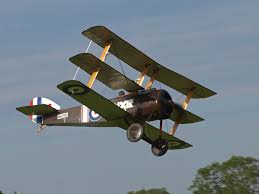