The British Sopwith T1 ''Cuckoo'' was a Bi-Winged Torpedo Bomber Plane was developed in World War I for Aircraft Carrier deployment (1917). By the time it was placed in Service in 1918, The War would end before The ''Cuckoo'' could be effective. Over 200 T1 Bombers were delivered to The Royal Navy. The Bomber would remain in British Naval Service until it would be replaced in 1923. Piloted by (1), The ''Cuckoo'' was 30-feet long with a Bi-Wing span of 47-feet. Power was provided by (1) Sunbeam V8 Engine, capable of 200-HP. Airspeed was rated at 105-mph. They had an operational ceiling of 12,000-feet. Armament included no Machine Guns, as the primary Mission of The T1 was Anti-Ship and Submarine Warfare. They could support a single 18-inch Torpedo. 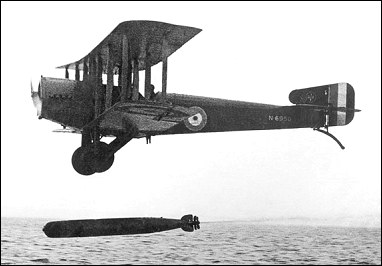