The Smith Gun was yet another British Home Guard weapons system which was devised during World War II to held counter the very real threat of a German Invasion of Great Britain. They were among the first such ''ad hoc'' weapons systems erected after The Evacuation of The British Army from Dunkirk, France (1940). The Smith Gun was in reality a steel Barrel (slightly over 600-pounds) with attached, recessed side wheels. An attached Bar allowed The Smith Gun to be either pulled into position or driven (towed) by any number of vehicle types.

Multiple smooth bore barrels were installed inside The Barrel. The Smith Gun could be used to manually fire small Mortar Rounds (3-inch). Although effective from 100 to 300-yards, The Smith Gun was claimed to be able to achieve 1,600-yards. The weapon was seen as an Anti-Tank type of defensive gun. Either 1 or 2 Men could deploy a Smith Gun. So effective (although never used to defend England from the perceived German Invasion), several Smith Guns found there way into The Regular Army inventory. A common reported mechanical problem with The Smith Gun was the occasional misfire (which often detonated several barrels at once). At least (14) Men were reported as being killed in this fashion by accident. The Smith Gun was decommissioned in 1945. 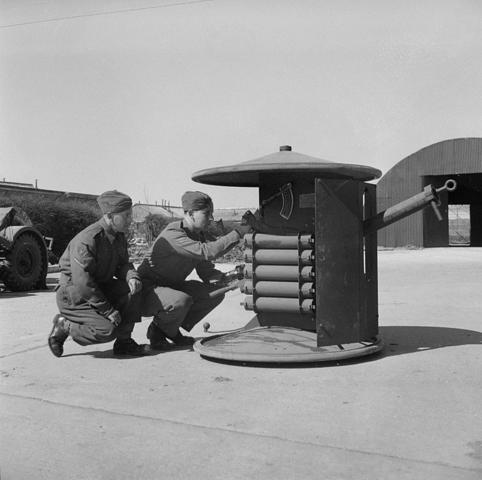