The British Royal Waggon Train was a Formation of The British Army and formed in 1794 – in support against The French Revolutionary Wars (a part of The Napoleonic Conflicts in Europe). The primary Mission of The ''Train'' was to provide transport of war materials to The British Army in The Field – during time of War. Some 2,000 Officers and Men were ultimately assigned to The Train. During a 300-mile retreat during The Peninsular Campaign of 1809, The Train assisted in the movement of thousands of British wounded and surviving war materials back to England. The Train was awarded with Citation for this act. Later as The Battle of Waterloo (1815), their tireless effort at moving supplies under fire, were a major contributing factor to The British and Allied Victories there. The Train helped evacuate over 4,000 British wounded from the battle.

The Train utilized wagons, horse and man-power to achieve it's end. Often, Train Drivers also had to fight as Infantry when they came under attack by French Forces. Although highly efficient – in Peactime, the need to maintain The Royal Train proved too costly. In 1833, The Train was formally disbanded. By the start of The Crimean Conflict of 1854, the absence of The Train was telling to The British Army (who had transferred Train Duties to Divisional Commissariats). Without a dedicated Corps. several engagements of that War suffered due to lack of – or slow to arrive materials. In 1993, with the establishment of a formal Logistics Corps. within The British Army – they assumed the true ''mantle'' of the former Royal Waggon Train. 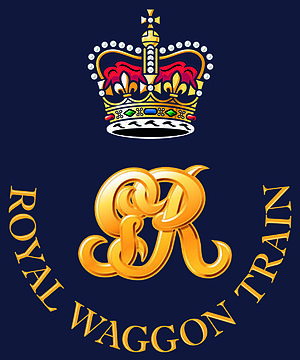