Another member of Britain’s Royal Household Cavalry Regiment, The “Life Guards” are another very recognized Military Unit. They were formed in 1788 as “Gentleman Troopers” and were said to have been made up of remaining Cavalry Officers still loyal to King Charles I (and later his Son) – before and after The Restoration. They were assigned the duties of protection of the physical person of The Monarch whenever he or she left their Residence. Although a Ceremonial Presentation Unit, The Life Guards are still a regular Member of The Royal Army, and as such has fought in many battles. They distinguished themselves at The Battle of Waterloo (1815), The Sudanese War, The Boar War, World War I and II. They too have served in The War on Terrorism.

Known as Mounted Dutymen upon completion of their training, The Life Guards are associated with British Armored Regiments. Their training takes roughly 12-weeks. The Life Guards are identified by their Scarlett Red Cavalry Tunics which also incorporate the metal Curiass Breastplate. They (like The Blues and Royals), wear The Mitre Hat and carry the traditional Cavalry Saber as their principle ceremonial weapon. A fixture at The Royal Palace, The Life Guards protect the Person and Residence of The Monarch and Royal Family. 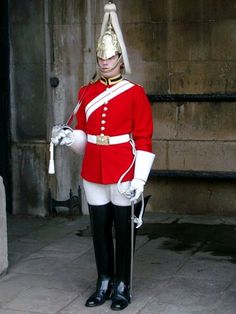