Created during The French and Indian Wars in Colonial America (1755), The Rangers were founded by Major Robert Rogers. An experienced frontiersman, Rogers noted the fighting techniques of the Native Americans. Their use of cover and concealment as well as their "cut, slash and run" tactics showed how a smaller force could inflict heavy casualties to a much larger force. Although though of as "ungentlemanly" in terms of the style of warfare for the Period - the British still saw the importance of such a Unit. The Regiment recruited likewise trained frontiersmen, hunters and trappers and operated mostly in the Upper New York region. Noted for their Green uniforms with browned equipment, this allowed the force to hide themselves in their surroundings (wooded areas) - a a time when bright colored uniforms were the norm. They were equipped with musket, pistol, knife and tomahawk (axe). They were a lethal and effective fighting force. Rogers recorded his "training ethos" in a document known as "Rogers Standing Orders". These "Orders" are still the backbone of The US Army Rangers. The Regiment remained in British service until 1766. This style of Unit was briefly re-constituted from 1776-1777 in The Continental Army. 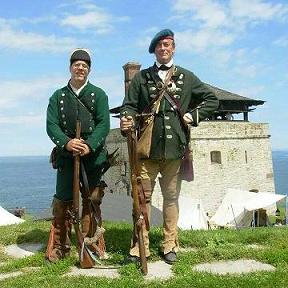