The Queen of England (Monarch) is identified by a special form of Naval Ensign (Flag), used by The Royal Navy. This Color Ensign is only flown when The Queen is aboard (physically) a specific Vessel. Her ''Color'' is only flown from The Bow of The Ship on a special Pole called a ''Jackstaff''. Used for Her Transport when present aboard only a Warship of Her Navy, The Queen's Color is a modification of the traditional British ''White Ensign'' (The Service Flag currently used by The Royal Navy). Upon a White Field is placed The Red Cross of St. George (another Ancient Flag), which serves to ''Quarter'' The Flag. The Upper Canton (Left and to The Hoist), features the full ''Union Jack'' (or British National Flag). Centered in The Cross is The Signet of The Monarch (initials), surmounted by The insignia of The Order of The Garter. The Monarch's Coronet (Crown) is over this image.

An example of usage, would be the Naval Version of ''Trooping of The Colors'' (The Queen's Review of Her Guard Regiments) – known as The ''Fleet Review''. The chosen Ship to carry Her bears this Flag. 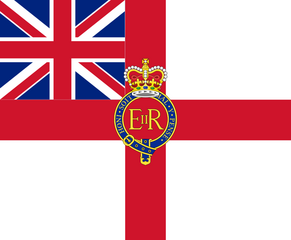