Designed and built by The German Panavia Aircraft Company in 1979, The Air Defense Variant (ADV) Fighter Jet was incorporated into The British Royal Air Force late in The Cold War (1985). The ADV was envisioned as an Interceptor-Fighter meat to be interdiction Units against a possible Soviet Bomber attack which could have approached from The North Sea. The ADV supported state-of the-art Radar and LRM (long range missile) targeting. Dubbed ''Tornado'' by The RAF, The ADV was also marketed to both The Saudi Arabian and Italian Air Forces. Seen only as an Interceptor for Enemy Bombers, it wads debated that it had little maneuvering capabilities and even less air combat abilities, should it be countered by Enemy Bomber ''Escorts'' (such as The soviet ''Fulcrum'' and related). However, this was countered with their ability to remain on Patrol longer over The North Sea, which made them more useful than most (then) British Bomber Interceptors. They would be retired in 2011 for The Eurofighter ''Typhoon'' Multi-Role Fighter Jet.

Crewed by (2), The ADV has a ''variable swept wing'' configuration pattern which could be set to either 25-degrees (at 45-feet) and 67-degrees (at 28-feet). The fuselage length was 62-feet. The ADV was powered by (2) Turbo-Union RB-199 Turbofan Engines capable of producing over 16,000-IBF Thrust. Airspeed is rated at Mach 2.2 (or over 1,400-mph). The Mission range is 2,500-miles. Operational Ceiling for The ADV was roughly 50,000-feet. Although an Interceptor, The ADV ''Tornado'' supported offensive/defensive weaponry. It supported (1) Mauser BK ''Revolver'' 27mm Auto Cannon (fuselage mounted). They carried (8) AMRAAM Rockets. The ADV is currently no longer in any National Air Air Force inventory. 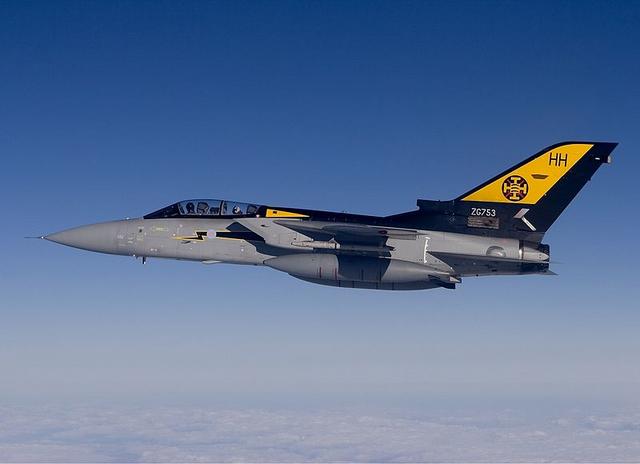