The “horrors” of Trench Warfare were brought home even more closer with the deployment of the hand grenade. Although not a new ideal, World War I was the first conflict to rapidly redesign and develop hand held and thrown explosive devices. The British Hand Grenade #1 was an example. First seen in 1908, the device weighed around 1 pound. A cylindrical metal case was mounted on a wooded handle. Handles started at around 15-inches long. Designed to give a better grip on the device for throwing towards one's enemy, the No #1 was activated pu a pull fuse which extended from the inside of the wooden handle. A user was supposed to have about 30-seconds to deploy. Upon explosion, the charge would ignite (slow fuse) and explode – sending small pieces of metal and iron shrapnel in a 5- meter radius. Accidental discharges and misfires occurred quite regularly. The German Army had a “technique” involving using wooden boards to either hit back the grenade (prior to explosion) of to simply stop it's flight, retrieve it – and throw it back! Production of this Model stopped in 1915. 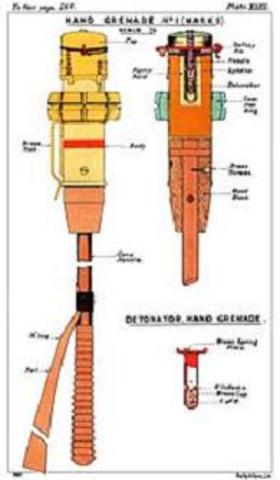