One of the last Field Mortars deployed by The British Army during World War I, The Newton Mortar was designed by British Army Officer Howard Newton. An experienced Trench Warfare Officer, he saw the need for a highly mobile Mortar for battlefield use. The Newton Mortar was 4.5-feet in barrel length. A Crew of 3 Soldiers could fire up to 8 aimed shots per minute. The Newton had a minimum effective range of 100-yards - but could achieve 1,900-yards maximum.

The Newton, unlike most Mortars during The War, was more mobile, with just several small Soldiers required to move it. The Base Plate had multiple hand-holds, you which ropes could be attached. The Mortar could be dragged for repositioning. Like most Mortars however, the tube was fixed, and elevation and traversing was difficult and time consuming. Most Commonwealth Forces used The Newton during World War I, with several attempts to mount it on the backs of various Armored Vehicles. 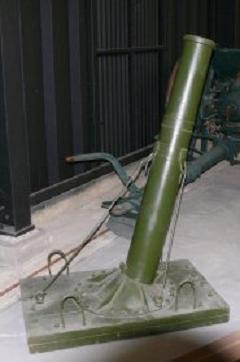