The Natal Carbineers were formed in Pietermaritzburg, South Africa (1855), as a type of ''Light Mounted Infantry'' Regiment. Their classification as ''Carbineer'' is taken from Troops armed with Carbines (as seen in heavy use during The Napoleonic War). They served as a Militia Force and tasked with protection of The Natal Frontier (Cape Colony Settlers). The Regiment was involved in several Conflicts between Colony settlers and several Tribes (1860s). At the start of The Anglo-Zulu War in 1879, The Natal Carbineers were called up to join The British Regular Colonial Army under Major-General Lord Frederick Chelmsford. They formed a portion of The Central Column of that Formation. At The Battle of Isandhlwana in 1879, The Natal Carbineers mustered (85) Officers and Men fir duty. They lost (23) of their Rank to The Zulu.

Purchasing their own Uniforms and providing their own Mounts, The Natal Carbineers (like most Irregular Forces in South Africa), were supplied weapons and equipage from The British Army (while on active duty). They chose a Dark Blue Tunic and Trouser Uniform with the standard Pith Helmet. The Regiment would serve thru The War. They would remain (as they still are), an integral component of The South African Frontier Army Formation. 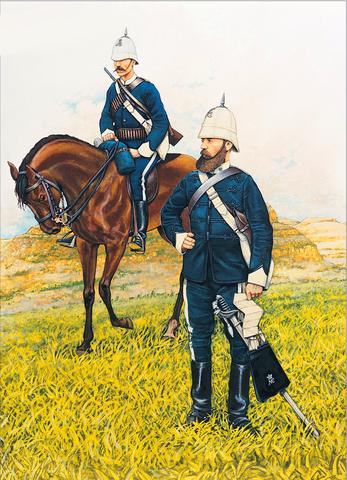