British Most Noble Order of The Garter

Perhaps the most well known of the “Knightly Orders”, it was created around 1348 by Royal Authority. Originally designed for Nobility and Royalty that were to form a “backbone” of The Monarch's “trust”, originally, military deeds were a criteria. Instituting “The Round Table” of Arthurian Legend – the Holders originally met in this way when called. Commoners and Women were originally not included (but are now). Identified in Heraldry by a Blue Garter, legend states that at a Royal Ball in 1347, The Princess of Wales “dropped” her Garter from her leg. Picked up by King Edward III, he placed it around his arm (as a band) and was said to have uttered the phrase “Shame on him who thinks ill of It”. The Award is given by the Reigning Monarch. Considered a “sacred” ceremony, The Public may not attend the actual service. A Ceremonial Sword is issued and one's Heraldry is to reflect the Honor. The collection of Awardee's are kept at St. George's Chapel, Windsor Castle, England. IF an Awardee dies, his Award if “offered” to God (prior to removal and storage outside of The Chapel). The Order uses the Ranking system of Grand Master, Knights Commander, etc. Woman may be invested with the Award and are Titled as “Dame”. Men are addressed as “Sir” (which is in keeping with “Knightly” traditions. 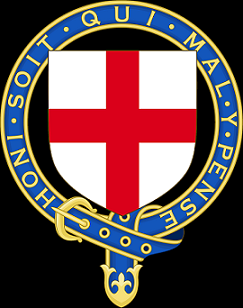