With the Motto “Who Will Sever Us”, The Order was founded by King George III in 1783. Designed to recognize Irish Nobility (and loyalty), The Order was disbanded and disavowed for wear and issue by Irish Rebel Government (1801). However, whereas Ireland had NO Order of Chivalry, it was quickly re-adopted by them. Similar in structuring to The Order of The Garter, The Order uses the Irish Shamrock device as the Orders insignia. Originally made of pure Gold, the addition of Roses and Harps were later included. Originally, if a Holder died – The Order's insignia was to be returned to The Lord Commander of The Order. Women are not admitted and a Holder's “religion” is also a factor (only Catholic Nobility). 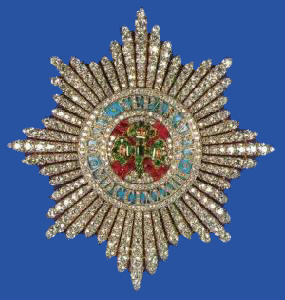