Produced by The Elswick Ordnance Company (England), The QR Naval Gun was first deployed in 1887 with The British Navy. The Guns were semi-Casemate mounted, Warship ''secondary'' Defense, Deck Guns. A carriage mounted version was developed from Coastal (Harbor and Port) Defense Guns, adopted and used (in a limited capacity), by The British Army against Boer Militia. Their most famed used was in Defense of Ladysmith (Natal, South Africa 1900), by The British.

The Boer Army adopted various 155mm French Field (Siege) Pieces (known as ''Long Tom's''). During general siege operations and harassing fire, The Boers caused great ''havoc'' with The British with these Guns. Able to fire at a greater distance than most ''captured'' or purchased small bored artillery – The 4.7-Inch Gun was The British counter. Breech-loading, The QF fired a 4.7-Inch Shell (120mm). In their ''Field Mounted'' Version, they were 5,000-pounds in weight and required (10) Soldiers to deploy (from modified fixed emplacements). A cyclic rate of fire for a trained Crew was 5 to 6 rounds per minute.

Elevation ranged from 10 to 24-inches with The QF Gun having a maximum effective range of 10,000-yards. The Model would remain in Service well after The Boer War (and into World War I) in the 1920s – by The British Navy. 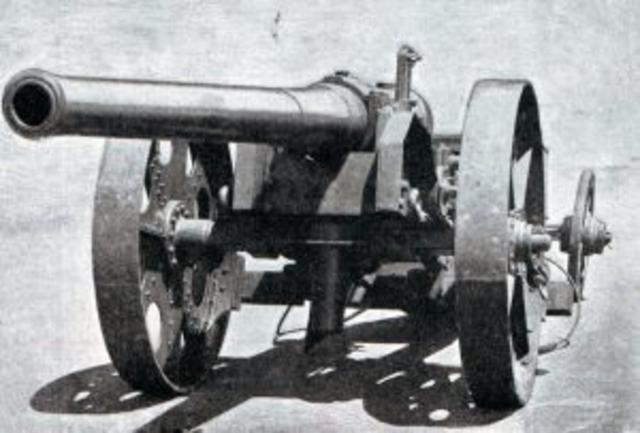