As has been previously discussed, World War I was punctuated by the extensive use of Trench Warfare. These deployments involved hundreds and thousands of Forces from both Imperial German and Allied Armies, bogged down in many hundreds of miles of hand dug earthen trenches (many just 6 to 8-feet in width). Often attacked and counter-attacked, the use of then “modern” weapons were seemingly useless. Most Soldiers on both sides of the Conflict resorted to tried and true forms of “improvised” weapons to survive the constant hand to hand fighting. While all sides moved to create such weapons, Soldiers still made their own. From Hand-made “Battle Knives” to improvised Grenade Throwers and Catapults, World War I at time resembles many battles from The Middle Ages at times.

One of the last Government procured and issued “Trench Weapons” of World War I, was The British Model 1916 Trench Sword. Harkening back to Ancient Rome, The Trench Sword was an almost exact copy of the Gladius Sword, used for generations by The Legions of Rome. The blade of the weapon was 2.5 to 3-feet in length and featured a flattened, bulbous upper blade design. Double edged, it could cut through heavy cloth and leather very effectively. This The Trench Sword was used as both a stabbing and chopping implement. The handle was made of steel, with some surviving examples even being made of one continuous piece of forged metal. Leather straps were wrapped around the handle for grip. A leather with steel reinforcement scabbard was used to carry The Sword. The Trench Sword was last used as an Infantry weapon in The Battle of Messines (Belgium) in 1917, when British Forces fought some of their worst Trench Warfare. 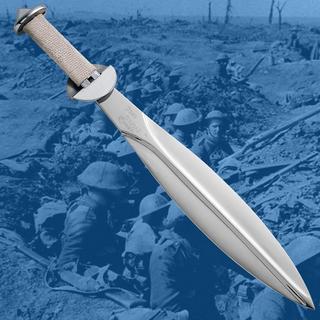